More than just a regular T.V. & Radio Host, multitalented Orlando Miller aka LandLord is a trailblazer being one of the Bahamas’s top International Gospel Reggae artist, an inspiring Producer for not only himself but for upcoming talented gospel artists catapulting them to the next level in their gifts as God is doing with him. This Gospel music artist, business mogul LandLord continually dominates the music industry creating The Bahamas brand to be a global hallmark. His CHILDHOOD contributed to his strength, his passion, his drive and success for building a music empire from the ashes of his poverty-stricken and depressed childhood. Amidst adversity LandLord made the choice to leave home at an early age of 11 years, live with friends and gain useful employment as a gas attendant. Little did he know that even though he was in despair, God was always guiding him to his destiny.  As he developed his music genre his journey led him to the church home of Bahamas Faith Ministries International where his life would never be the same. His encounter with the late Dr. Myles Munroe and other legends including Pastor Dave Burrows, Dr. Carlos Reid and Christian Massive gave him the structure and network that he needed to launch his music career and thrust him to be spiritually and economically established. 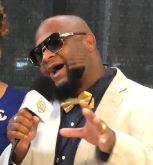 Today, music mogul Orlando Miller aka LandLord, is happily married with two kids, owns and operates LandLord Media Company, hosts the Positive T.V. show which broadcasts all over Africa, South America, Canada, the United Kingdom, Europe, Asia and 22 Caribbean islands and airs on many televisions networks worldwide including Tempo, Caribvision, ZNS, Our TV or Cable 12, Channel 44, All Nations TV and also Impact TV. LandLord’s heart lives in the worship! He recently released his new album “What this World is coming too?” It highlights events happening in the world today and is available now on iTunes, CD Baby and all other digital outlets. A three time Caribbean Gospel Marlin Award winner, Landlord, co-hosts the Bobby Jones Show on Impact TV, and partnered with Round the Clock Entertainment owned by Carlton McConnell to launch the new music video programme, CAAG (Caribbean African American Gospel Hits Show). Their mission is to help launch independent artists from all over the world by branding, marketing and producing their music. LandLord was nominated as the first Bahamian to be nominated for the Stellar Awards as Radio Announcer of the Year. He has also been nominated for other international music awards such as Prayze Factor People’s Choice Awards and the Rhythm of Gospel Music Awards. He was recently nominated for 5 awards in The Bahamas Gospel Music Awards 2022.