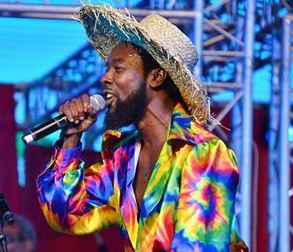 Kurt Allen was born in Maracas, St Joseph, in a Seventh Day Adventist household. His entry into kaiso started with his first calypso composition in 1982 as a student at Curepe Junior Secondary School. He began singing calypso professionally in 1983 when he sung “The Budget at the Junior Calypso Monarch. With his career spanning over 30 years in the business his successes include winning the 1993 Young Kings Calypso Monarch. Throughout the 90’s he has consistently made it to the Calypso Monarch Finals. In 2010 he won with the song “Too Bright.”, a song about common sense in the face of crime, poverty and unemployment. He has also placed 2nd in the Calypso Monarch competition on three occasions: 2012, with “Long Live Calypso” and “When Will It End”; 2013, with “Political Sin-Phony” and “Black Stalin Say,” and 2014, with “Sweet Sizzling Summer” and “The Lost Psalm Of King David.” His more recent popular pieces include The Last Bad John, Tribute to Attila the Hun, King #2, Pot Of Gold, Stampede, Sexy Body and Calypso Alive.
It should be noted that in 1999 he successfully crossed into party music and won the Soca Monarch with “Dus’ Dem.” Kurt cites as part of his learning experiences as being back up at one time or the other for Stalin, Shadow, Rudder, Bally and Baron. His fond memories include Travelling with Roy Cape on a European Tour and as a result singing at a party for Mick Jagger.
As an advocate for traditional kaiso he admires icons of the past such as Atilla, Lord Executor, Roaring Lion and Growling Tiger.”