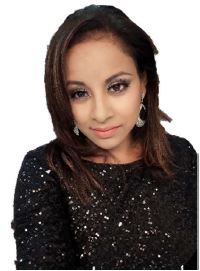 Born as Anuradha Rampersad in Central Trinidad (Warner Village) to parents Ramsaran Rampersad and Sumintra Harry, Anuradha later moved to South Trinidad at the age of 5. Life with her maternal grandparents who were rooted in Hinduism, allowed for her exposure to music which came in the form of singing at a very young age at the Suchit Trace Ganesh Mandir. Teachers at her Primary school (Suchit Trace Hindu School) picked up on her talent and asked her to be the lead singer for all school performances inclusive of Baal Vikaas. Her love for singing grew and later on with the assistance and guidance of a family friend she entered Children of Mastana. She placed 2nd in the Grand Finals of 1997 and later participated in Mastana Bahar, securing a place in the grand finals with a duet performance alongside Satnarayan Ramdeo. Although not winning they were voted as the “The People’s Choice” winner. For a short time she was also the lead female vocalist for the then new, Dil Ki Awaz Indian Orchestra.

Taking a long break from singing (for personal reasons), She finally re-entered the industry in 2011 as a recording artist. Her debut song being Jawaani Jane Mann which was recorded and produced by Anil Bheem. Later that year she joined the Pungalunks factory under the stewardship of Zaheer Khan “Big Rich”. She now has a multitude of recordings and has also worked with artists such as Drupatee, Satnarayan Ragoo, Indar Kanhai, Kavita Maharaj and others. The highlight of her career was performing on the same stage as Udit Narayan for his concert in Trinidad & Tobago in 2017. While she is known for some of her top Bollywood remakes such as Pyar Ke Liye, Palki Mein, Panchi Bole (With GI), Payal Meri (With Satnarine Ragoo) & Veera Hanuman (with the late Rajin Dhanraj); she also dabbles in other genres such as country, pop and reggae as well as Gospel. She continues to share her love for singing and looks forward to continued success with the support of her team (Production and Family) as well as her fans.