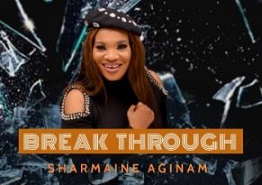 Born as Sharmaine Gift in 1982 in Georgetown, Guyana, her parents were the late Randolph Gift and Edna McPherson. As a born again Christian, Sharmaine recognized God’s intervention in her life when he ‘gifted’ her with a special talent. She became proficient in music and elected to hone her skill in the gospel genre. She is a songstress of immense talent and a Psalmist by calling and she loves to usher people to the presence of God through prophetic worship.

Her first attempt was in multi genre music where she was a former member of the ‘Fireclan’ band, led by the late, Osley “Spider” Hopkinson. In terms of Gospel she has led worship sessions at “Fruits At The Cross Ministries Inc.” In 2020 she released an independently self-released single ‘Breakthrough’ which is a testimony of the many trials, tribulations and hurdles she encountered. She expressed that “God, in his wisdom, has given each of us special ‘gifts’ which can be used for our personal fulfilment and for the advancement of his Kingdom.” Sharmaine Aginam is a living testimony of such divine benevolence.