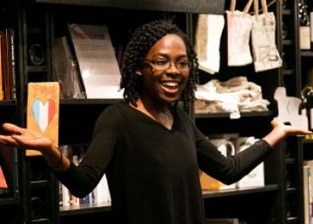 Onicia Muller is a St Maarten screenwriter, columnist and comedian. She gave up crime reporting to write about happier topics for HelloGiggles, HuffPost, The Daily Herald, American Greetings, Rebellious Magazine, Blavity, and others. She also did a weekly humour column  “Just Being Funny” in The Daily Herald’s Weekender.

In February 2018, Onicia was named awesome Chicago Female Comics to follow by Women in Comedy. And in June 2018, she received IGNITE Caribbean’s 30 Under 30 Caribbean American Emerging Leaders award for her work as a cultural influencer.  Rebellious Magazine described her as “A ray of sunshine with a dark sense of humour who knows how to weave a hilarious tale about the human condition with a thoughtfulness that demands deep consideration.”

In terms of stand-up comedy she has since performed at the Laugh Factory’s open mic, in Chicago’s top all-female comedy shows: the Kates and The Mother Cluckers. She’s also opened for Majah Hype, the Caribbean King of Comedy. Her achievement in Theatre includes “Oh Baby!” A collection of four short plays about couples and babies. Her primary mission is to use comedy to achieve world domination encourage empathy and understanding. For more on Talent Like Onicia click HERE